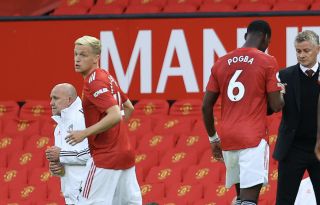 Van de Beek, 23, joined United during last summer’s transfer window after making a £39m switch from Dutch side Ajax, as per Sky Sports.

The talented midfielder has always been one of Europe’s most highly-rated playmakers after showcasing sublime versatility and technical ability.

After helping to guide his former side Ajax to the 2018-19 Champions League semi-finals, van de Beek emerged as a serious transfer target for a host of top-flight European clubs.

However, fast forward 12-months and a pandemic later and it was to be United who won the race to secure the Dutchman’s services.

Despite arriving with a lot of excitement surrounding him, van de Beek has struggled to nail down a place in Ole Gunnar Solskjaer’s side.

Having started just two Premier League matches, there is increasing speculation that the 23-year-old could be set for a shock exit.

Stretty News recently reported that there are growing fears that van de Beek has been mismanaged and a reluctance to avoid him becoming the club’s new scapegoat.

However, the outlet’s report also goes on to claim that despite van de Beek’s lack of playing-time the Red Devils have no plans to allow him to leave.

The latest in the ongoing saga comes from ESPN who also back these claims up.

ESPN claim that United have recently turned down several offers to allow van de Beek to leave this month on a short-term loan.