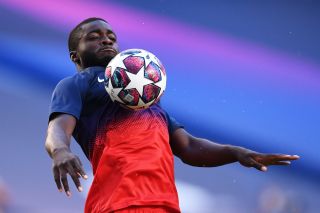 Upamecano, 22, joined RB Leipzig in 2017 after making a £9m switch from RB Salzburg, as per Transfermarkt.

Since joining the Bundesliga side, the highly-rated French centre-back has gone on to feature in over 130 matches, in all competitions.

After playing an integral role in his side reaching last season’s Champions League semi-finals, Upamecano has seen his stock dramatically rise.

The 22-year-old defender, who showcases a superb set of traits which could see him flourish in the notoriously physical Premier League has been linked with a host of top-flight clubs.

According to a recent report from the Evening Standard’s James Robson, another club to express their interest in the RB Leipzig star is Lampard’s Chelsea.

Robson claims that alongside Chelsea, are also Manchester United and Bayern Munich who are both competing for the 22-year-old international’s signature.

It has been claimed that the Blues view Upamecano as a possible long-term replacement for current centre-back Silva who will be 37 come the end of the year.

Chelsea currently have a wealth of defensive options among their squad which includes the likes of Andreas Christensen, Kurt Zouma, Antonio Rudiger and the recently departed on-loan Fikayo Tomori.

However, despite their bursting squad, it is believed Lampard would prefer additional quality in his back-line.