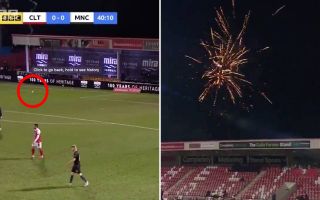 What is it with this year’s FA Cup and fireworks stopping play? Today’s clash between Cheltenham Town and Manchester City was temporarily whistled off by the referee after an impressive display above the stadium.

West Ham’s FA Cup tie with Stockport County a few weeks ago was halted for the same reason, with a firework display occurring outside the stadium grounds being far too close for comfort from the perspective of the match officials.

As Manchester City visited Cheltenham Town this evening in the fourth round of the competition, the referee once again halted play after fireworks lit the skies outside the confines of the stadium. The players were also pulled over to the touchline as fireworks began to land on the pitch.

It’s an annoyance for both sides, with the game right on the verge of half-time when the fireworks began. It’s pretty – no doubt – but can we make it this year’s final firework display, please?

The Cheltenham and Man City players have been taken to the side of the pitch due to fireworks going off outside the ground.

A fair bit of first half added time to come!