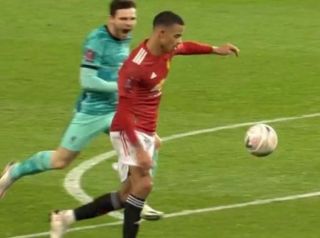 Manchester United levelled things up in the FA Cup clash against Liverpool through Mason Greenwood’s neat finish. Marcus Rashford supplied the assist with a tremendous pass then Greenwood took a touch and volleyed home.

As great as the finish was, Greenwood showed even more composure by ignoring the attempts of Andy Robertson to put him off his stride, as this hilarious photo shows:

Liverpool made a great start, taking the lead through Mo Salah, but since Greenwood’s goal it is the Red Devils who are on top. Paul Pogba missed a golden opportunity with a header, before going close with a free kick, whilst Luke Shaw has just put the keeper under pressure with a powerful cross/shot.