In the 84th minute of Chelsea’s FA Cup 4th Round encounter against Luton Town, Timo Werner’s nightmare run that has seen him labelled a flop by some continued with a disastrous moment.

Substitute Mateo Kovacic threaded the lightning-fast striker in with a brilliant defence-splitting pass from just past the halfway line.

As Werner latched onto the ball and was just preparing to round the keeper or finish, Jordan Clark – Luton’s sole goalscorer on the day – slid down and clattered the forward to the ground.

After the referee pointed to the spot, the German star was handed the chance to end a disastrous spell from the penalty spot, but it wasn’t meant to be as Werner saw his effort saved.

Werner fired the ball with some power into the area just between the middle of the goal and the corner, with Simon Sluga batting the ball away and leaving the striker with his head in his hands.

See More: Video: Silky Hudson-Odoi run and Gilmour one-two tees up Tammy Abraham hat-trick for Chelsea as ball is put on the plate against Luton in the FA Cup 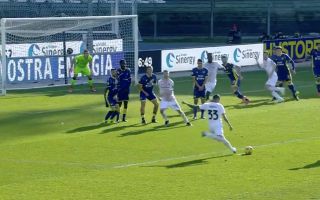 With another blunder on the big stage – perhaps even larger as Chelsea’s match was on terrestrial television in the UK – it might be time for Frank Lampard to save Werner from himself by taking the star out of the team for a prolonged period of time – in a last-ditch bid to ease some pressure on the forward.