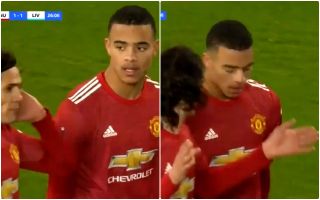 Greenwood drilled the ball into the back of the net after some fine work from Marcus Rashford and Paul Pogba, but 33-year-old Cavani was still insisting that the wonderkid can perform better straight after.

After Greenwood was done celebrating, with the ace walking back to the centre circle for the kick-off, Cavani pulled him alongside him and offered him some advice.

Whilst we obviously can’t hear what was said in the moment, it’s clear that the Uruguayan was urging the 19-year-old to look up more often – perhaps for passing opportunities.

A great goal from Greenwood, showing his clinical finishing. He’ll be developing a lot this season learning from Cavani’s experience as well!#MUNLIV #MUFC #greenwood pic.twitter.com/F9Y2VjkwKS

This isn’t even the first case of the determined Cavani pushing Greenwood to do even better today, with this moment early on after the wonderkid went alone instead of picking a pass.