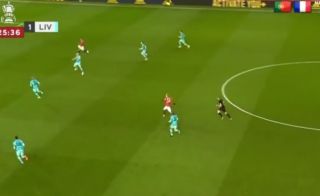 This game has already done more to excite than the previous league meeting between the two, and we’ve seen two sublime assists already.

Liverpool’s opener came after an inch perfect through ball from Roberto Firmino, but this isn’t too bad from Marcus Rashford either as he sets Mason Greenwood on his way:

The ball gives James Milner just enough hope that he can cut it out so he tries to intercept it rather than chasing it down, so it gives Greenwood the time to pick his spot and fire United level.