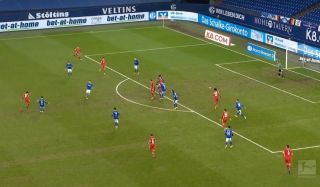 There’s been plenty of talk about David Alaba’s future and where he could end up, but he’s yet to be frozen out by Bayern Munich and that paid off today.

It’s always exciting when you know a goal is coming and you see the centre back line one up from 30 yards out, and there’s absolutely no stopping this one:

Alaba’s contract is still up at the end of the season and it looks like he’s going to leave, while a recent report indicated that Liverpool and Real Madrid are battling for his signature.

The move to Spain would make sense because Real love a big name signing and the lack of transfer fee will always appeal to them, but he could also be the long term successor for Marcelo or Sergio Ramos in defence so his signing would fill a big need.

Liverpool don’t need any help at left back but you could see Alaba partnering van Dijk and also offering some versatility when needed, so it will be interesting to see where he ends up.