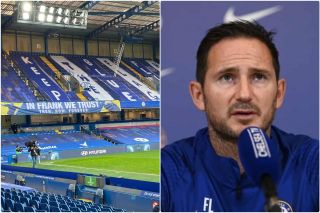 Things can unfold very quickly in football, with Frank Lampard the latest to end up on the wrong side of that as the legend is expected to be officially sacked by Chelsea as early as today, per the Telegraph.

Lampard is set to be relieved of his duties less than 24 hours after managing the Blues for an FA Cup victory against Luton Town – however victory was firmly expected against a Championship side.

In a heartbreaking moment, it turns out that the 42-year-old’s last ever comments as Blues boss, in the post-match press conference following the 3-1 win were all but the ‘support’ he felt from the club.

Lampard was also ‘very appreciative’ of the classy gesture from a group of the club’s fans that saw banners in his support hoisted in the famed ‘Shed End’ at Stamford Bridge.

The banners can be seen here, one reads ‘In Frank we trust – then, now and forever’ whilst the other appears to be ‘Frank Lampard’s Blue and White Army’ with a picture of the legend as a player.

The question regarding the banners and the support that Lampard felt came from the Guardian’s Jacob Steinberg, who is now seemingly the last member of the media to talk with the legend.

Frank Lampard’s last ever comments as Chelsea boss saw the legend praise the ‘support’ he felt from fans and the club, as well as his ‘love’ for the team. Less than 24 hours later the 42-year-old has been sacked… pic.twitter.com/n0YcTgm6tn

“I wouldn’t say today because I was focused, I knew about the banner a week or two ago and quite directly from the people that put it together – who are obviously huge supporters of this club.”

“I was very appreciative, I don’t know if emotional is the word but people who know how I feel about this club understand that it’s a two-way thing from when the first time I came here 20 years ago nearly.”

“I’m very thankful for that support, it’s great to see it at the Bridge, I feel it very strongly, I know the modern world has moved on – social media and eyes that come from all parts of the world.”

“One thing I do know when I’m at the Bridge is that I’m at a club that I love and that has always shown me support as a player – and now as a manager.”

“I appreciate it very much, all I want to do is repay that with being successful at the club, working through a tough moment to try and bring a long-term success to the club.”

“I keep saying it recently, there will be moments of pain and moments that are difficult because of the situation, when you see fans that are there to stick with you – from now and going forward and forward – that’s an important thing for me.”

This is a chilling reminder of how brutal things can unfold in football at times, there’s no hiding the fact that Lampard was on the brink, but to find out after this and in this manner is pretty harsh.

This was perhaps a ticking time bomb of an appointment, Lampard ends his run of 57 Premier League games in charge of the Blues with the side’s fourth-worst points-per-game average in the modern era.

Whilst the legend secured a fourth-place finish for the Blues last season the campaign ended on a sour note with a defeat to rivals Arsenal in the FA Cup final.

Chelsea have also underperformed far too much for a side that spent an incredible amount of money on transfers – with mega-rich owner Roman Abramovich signing off on the spending of massive funds – whilst the rest of the football world were crippled by the financial impact of the Covid-19 pandemic.

It appears that Thomas Tuchel, the man sacked by Paris Saint-Germain less than a month ago around Christmas, is set to take the reins at Stamford Bridge.