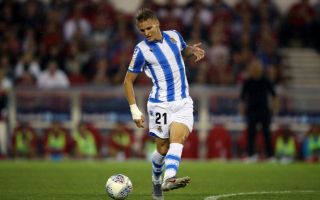 Martin Odegaard looks set for a loan to Arsenal which could be made official very soon.

Fabrizio Romano has had his say on the Real Madrid attacking midfielder heading to the Emirates Stadium for the rest of the season, with everything looking all set for the move to go through, as per his tweet below…

MORE: Why Odegaard signing could be a risk for Arsenal

Real Madrid have signed paperworks and contracts to accept the loan deal, Ødegaard will be a new Arsenal player in the next hours.

Martin is officially authorized to have medicals then he’ll be announced as new #AFC signing. No buy option. Here we gø confirmed. ???

With Mesut Ozil leaving Arsenal for Fenerbahce, this could be a hugely important signing for the north London club.

Mikel Arteta’s side have been short of spark and creativity in attack this season, with the form of last term’s top scorer Pierre-Emerick Aubameyang suffering as a result.

Luckily for the Gunners, Odegaard looks absolutely ideal to give them what they’ve been missing, as this impressive highlights video below shows…

The Norway international may not have had much playing time at Real Madrid, but he’s faced plenty of big-name competition for a place at the Bernabeu.

In his previous loan spells, however, Odegaard has shown his quality on the ball and superb range of passing, which should give Arsenal a much-needed new dimension to help them improve in the second half of the season.