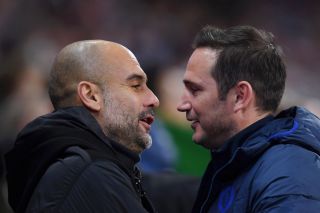 Manchester City manager Pep Guardiola has shared his brutally honest thoughts on the beautiful game and classy comments on Frank Lampard after the legend was sacked by Chelsea earlier today.

The first reporter up for the pre-match press conference ahead of the tie against West Brom quizzed Guardiola for his immediate thoughts on the sacking and the ‘challenges’ young managers face.

Guardiola was brutally honest when he stated that it doesn’t matter how young or old a manager is – ‘you have to win’, with the ex-Barcelona boss adding that ‘projects and ideas’ don’t ‘exist’.

Lampard has found himself relieved of his duties less than 24 hours after he professed the ‘support’ he felt from fans and the club following the FA Cup win against Luton Town and his ‘love’ for the team.

See More: Thomas Tuchel already in London and to be presented as Chelsea boss after training session per Bild journalist

Pep Guardiola with some brutally honest comments on management after Frank Lampard was sacked by Chelsea, adding he can’t wait to dine out with the legend when lockdown’s over… pic.twitter.com/jq3lcOg6jq

“Young and old managers? You have to win. The people talk about projects and ideas – they don’t exist, you have to win if not you will be sacked.”

“Respect the decision from Chelsea of course, but a huge hug for Frank, hopefully I can see him soon, when the lockdown will be over I can go to a restaurant to see him again.”

“We (managers) depend on the results, not the way we played, not about philosophy – these kind of things or the projects – we have to get results. If you don’t you will be replaced by another manager.”

Guardiola was also quizzed on what Tuchel will bring to Chelsea, with the German’s appointment imminent, however he refused to comment on the rumours:

“When it’s confirmed I will let you know.”

The respect that Chelsea have for Lampard, owing to his fine service to the club during his playing days, was marked when owner Roman Abramovich shared a rare statement as the sacking was announced.

It was unfortunately clear that Lampard was on the brink after a run of five defeats in the side’s last five Premier League games has left the Blues ninth in the table and outside the European picture for now.