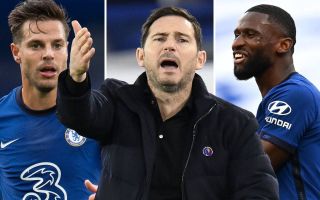 Frank Lampard was sacked by Chelsea earlier today, and if claims made by the Telegraph are to be believed, one player in particular did him no favours in his efforts to save his job.

Oftentimes when a manager departs, his relationship with at least some of the dressing room has soured. It’s impossible to keep everybody happy – especially when you’re not winning games.

As per the Telegraph, one man who was seriously disgruntled with life under Lampard, and perhaps understandably so, was Antonio Rudiger, who had been completely frozen out by the now former Blues boss.

The Telegraph report that Chelsea were keen to sell Rudiger over the summer, but with a move not materialising, and the German international not playing, tensions boiled over on the training pitches.

The report claims that Rudiger clashed with club captain Cesar Azpilicueta on multiple occasions, with the Spaniard attempting to put an end to disputes, rather than cause any himself.

There’s suggestion that influential figures in the squad who were not playing under Lampard had taken their frustrations out on some of the younger players, who subsequently complained.

It sounds like a tale of player power getting the better of Lampard and creating an uneasy environment for him to work within. Though, considering how much managers Chelsea got through during his time as a player, he’ll know all about that.