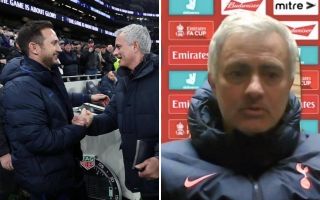 In wake of Tottenham’s FA Cup win over Wycombe Wanderers, Jose Mourinho was quizzed on Frank Lampard’s sacking by Chelsea.

Mourinho knows all about being dismissed by Roman Abramovich, having had it done to him at the end of both of his respective stints at Stamford Bridge.

He’ll know exactly how Lampard is feeling this evening, being given his marching orders by the club he adores, having watched his side fall down the table.

Mourinho will likely have spoken to Lampard behind the scenes before, and after, he took the job at Chelsea, with the pair sustaining a good relationship from their time together in SW6.

Tonight, after Tottenham overcame Wycombe Wanderers 4-1 in the FA Cup, Mourinho was, predictably, asked about Lampard’s sacking, which was Monday’s big news.

Mourinho reiterated Lampard’s significance to his career, revealing how he felt sorry for him, but will not be reaching out to him any time soon to offer support.