Tammy Abraham and Cesar Azpilicueta have taken to Twitter to deny rumours which have been circulating about Chelsea teammate Antonio Rudiger.

Rudiger fell out of favour under Frank Lampard, having been a prominent figure under the stewardship of both Antonio Conte and Maurizio Sarri. It’s unclear just how strained their relationship was at the time that Lampard was sacked by Chelsea.

MORE: Antonio Rudiger to profit from Lampard sacking, but defender a culprit of player unrest

As reported by the Daily Mail, Rudiger has received a fairly significant amount of abuse from Chelsea fans on social media, with rumours circulating of the German being a rat within the dressing room, perhaps contributing to Lampard’s downfall. 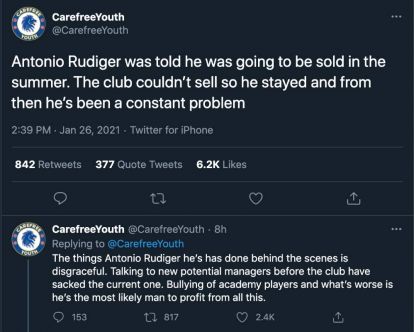 As with all of these things, it’s difficult to determine exactly how accurate they are – unless teammates were to come out publicly and defend the man being accused. Thankfully for Rudiger, in this case, they have.

First of all, Tammy Abraham sent out the below, which was pretty conclusive in itself.

Hearing some mad stuff about @ToniRuediger on social media today. Compete nonsense. Toni is a big bro to all of us

And if you needed any more proof to be provided, captain Cesar Azpilicueta also stood up for Rudiger.