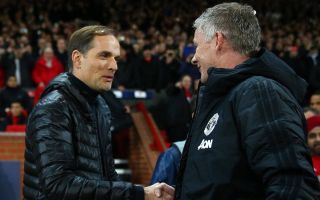 According to the Standard, influential figures at Manchester United wanted Thomas Tuchel over Mauricio Pochettino.

It seems bizarre to be talking about managerial changes at the team that sits top of the Premier League table, but Ole Gunnar Solskjaer’s position as manager at Old Trafford was under threat earlier in the campaign.

Man United were underperforming and, at that point, had little hope of challenging for the Premier League tale. Yet, at the halfway point, they are outright leaders at the summit.

As per the Standard, one man who was in the conversation to replace Solskjaer, if push came to shove, was Mauricio Pochettino, who later joined Paris Saint-Germain.

You feel as though he would have been the fans’ choice, but the report also claims that senior figures, pulling the strings at Man United, wanted Thomas Tuchel, who will now be joining Chelsea.

The Standard’s belief is that Tuchel was not only in the race to get the Man United job, but may well have been ahead of Pochettino – which will be a surprise to some.

Regardless, Solskjaer turned it around and may well end the season as a Premier League champion. Whether Tuchel can do anything in terms of preventing that happening remains to be seen.