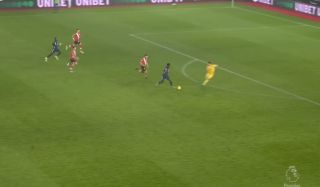 The early signs were ominous for Arsenal tonight as they went down to an early Stuart Armstrong goal, but they did well to hit back immediately and now they find themselves ahead just before half time.

It’s a fairly simple move as they win the second ball and sweep it forward, but the keeper has a nightmare and makes it fairly simple for Bukayo Saka to make up his mind:

A brilliant ball through from Lacazette and the teenager takes care of the rest! pic.twitter.com/fpo7QxBNO7

Bukayo Saka has ice in his veins, composure through the roof. Beautiful buildup to the goal and great finish. Our star boy ?. #SOUARS pic.twitter.com/pNr1GcxybD

He still takes it clinically, and Arsenal look set to leapfrog Chelsea in the league if the results holds.