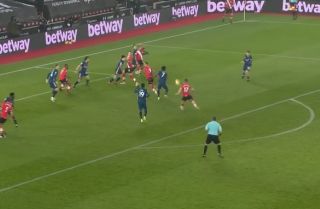 There’s an ongoing argument about defending set-pieces and whether players should look to mark a man or a zone, but it’s a moot point when they don’t do either.

Nicolas Pepe is either personally responsible for Stuart Armstrong with this set piece or he should certainly be looking out for anything played to the edge of the box, but he just stands and watches as the Scotsman runs onto it and fires it home:

Southampton get off to a dream start against Arsenal!

Stuart Armstrong with the first-time finish but how about the technique on that James Ward-Prowse delivery ? pic.twitter.com/1cAzcMWsOE

It’s a cheap goal to concede when you consider how easily defended it should be, so Arsenal fans will be hoping it sparks the team into life.

MORE: Video: Pepe didn’t need long to redeem himself at all!