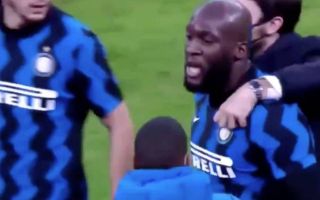 Did Romelu Lukaku really say THAT to Zlatan Ibrahimovic while making his way off the San Siro turf?

The pair locked horns, quite literally, towards the end of the first-half of the Milan derby tonight, with the two sides meeting in the Coppa Italia.

It’s unclear exactly what irked Romelu Lukaku to the extent that he would push his head up against Zlatan, but whatever it was, he was still irked by it after the referee has blown the whistle for half-time.

With Lukaku being held back by both Inter players and staff as the players attempted to make their way down the tunnel, he took to shouting abuse in Ibrahimovic’s direction.

In the clip below, Lukaku can be heard saying something along the lines of “I’ll f*** you and your wife”, which is quite the claim when talking to a 6ft 5in man.

This fight between Zlatan and Lukaku went too far I think ? pic.twitter.com/Gjgbv1JEkf

Lukaku was lucky to escape with just a yellow card from the incident, with red mist seeing him launch a torrent of abuse in Ibrahimovic’s direction. Has he gone too far?