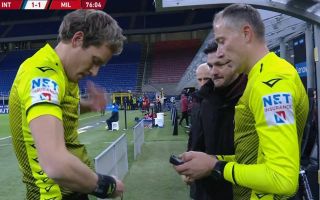 As if tonight’s Milan derby needed anymore excitement, the referee has been forced to leave the field after pulling his hamstring.

The match official had his work cut out with tempers flaring between Romelu Lukaku and Zlatan Ibrahimovic, with the latter being shown a red card for an unrelated incident ten minutes into the second half of the game.

While he was performing as well as could have been asked of him in an extremely difficult game to officiate, he has now had to leave the pitch, having pulled up with an injured hamstring.

Referee faking a hamstring so he can leave before Zlatan karate kicks him #INTMIL pic.twitter.com/UlQCxmkYVQ

?? 77′
Valeri has picked up an injury and the match will be refereed by the fourth official#InterMilan 1-1 #CoppaItalia #SempreMilan

This really is one for the books, isn’t it?

A referee who has already had to handle an on-the-pitch battle between two of football’s biggest personalities, and has shown a red card and given a penalty during the contest, has now pulled his hamstring and had to be swapped out for the fourth official.

It’s difficult to think of a better advert for Italian football, ever…