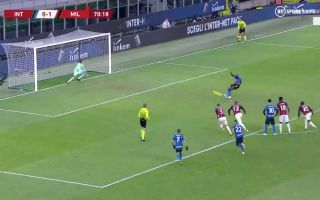 Romelu Lukaku has drawn Inter level in the Milan derby from the penalty spot, with there being an argument for him to have been sent off earlier in the contest.

Lukaku shoved his head towards Zlatan Ibrahimovic’s face at the tail end of the first-half, with the pair locking horns for reasons unknown.

The big Belgian continued to rant at Zlatan after the half-time whistle had blown, with the pair exchanging words as the two sides left the field of play.

Having been booked for the initial head butt, Lukaku can count himself fortunate that he was not shown a second yellow, just as Ibrahimovic was 10 minutes into the second period, for a separate offence.

He did, though, remain on the field, and that proved to be good news for Milan, with Lukaku emphatically despatching a penalty off the crossbar to level the scores. Now it is very much game on at the San Siro!

“And now he gets his own back!”