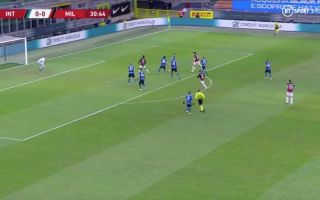 AC Milan have struck first in the Millan derby this evening, with Zlatan Ibrahimovic firing home from the edge of the penalty area.

Milan and Inter are going head-to-head this evening in the Coppa Italia – and you know how it often goes with Zlatan – the bigger the game, the bigger the threat.

Zlatan picked the ball up on the edge of the penalty area, was allowed far too much space to gather his thoughts before finding the bottom corner, with his effort bouncing in off the post.

See the Swede’s 14th goal of the season below.

Zlatan is 39-years-old, which is often worth reminding ourselves of.

The legendary striker is still playing at the top of his game and having such a great influence in games of this magnitude. With him in the side, it’s no surprise that Milan are top of the Serie A table.

Let’s see if Inter can strike back tonight, though…