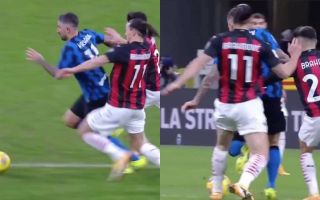 Zlatan Ibrahimovic has been sent off ten minutes into the second half of the Milan derby, with AC leading Inter as it stands.

Ibrahimovic’s influence was there for all to see during the first 45 minutes of the contest.

The 39-year-old found the back of the net with a quite superb finish from the edge of the box, before winding Romelu Lukaku up to boiling point, with the Belgian being lucky to escape red himself after pushing his head into Zlatan’s.

Lukaku’s rant at the big Swede went on as the two teams attempted to head down the tunnel for half-time, but the referee did not see fit to brandish the red card for the former Chelsea and Man United hitman.

Instead, the match official for tonight’s derby saved his red for Ibrahimovic, who was dismissed after being shown a second yellow for what was, in truth, not such a bad challenge – it’s soft.