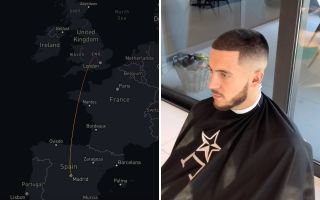 Eden Hazard, perhaps bizarrely, opted to fly a barber out from London to Madrid in order to cut his hair in the middle of the coronavirus pandemic.

That’s what’s been suggested in a TikTok posted by A Star Barbers, who have been known to tend to the barnets of several Chelsea and England stars over the years, hence how his and Hazard’s paths crossed.

With Hazard now playing his football in Madrid, rather than West London, though, you’d think that a change of hairdresser would have been forced upon him, especially considering the guidance on international travel ever since the COVID-19 pandemic began.

However, apparently not. While there’s nothing to suggest that this TikTok includes recent footage, with sun in the skies in Madrid and a tan on Hazard’s tank-top wearing skin, Ahmed Alsanawi, who has also previously cut Paul Pogba’s hair, is wearing a mask on the plane.

That suggests that Hazard flew him out to Madrid to cut his hair in the middle of a global pandemic, which you imagine a few people wouldn’t be so happy about, especially considering how badly both Madrid and London have been hit by the virus.

What do you make of this?