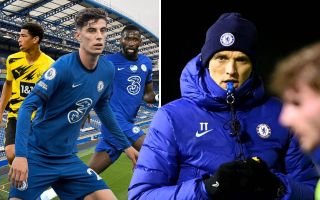 There’s no time for the Blues faithful to be down in the dumps in wake of the departure of a club legend, with supporting Tuchel in his efforts to turn their season around now top priority.

The former Borussia Dortmund and Paris Saint-Germain manager is set to take charge of his first Chelsea game this evening against Wolverhampton Wanders, though, you get the feeling that he will be reluctant to change too much, too soon.

Tuchel will bide his time before making wholesale changes to Lampard’s setup, through fear of destabilising what has been built over the past 18 months – and thus making the situation worse.

But, that said, we would expect Tuchel to change the landscape considerably over the first year of his contract, especially after a full summer transfer window and pre-season with him at the helm.

We’ve looked at Tuchel’s past successes at Mainz, Dortmund and PSG and considered how the Chelsea team could look like in 12 months time, with new signings included.

GK: Emil Audero (Sampdoria) – There’ll be some that think Tuchel’s arrival could be a fresh start for Kepa Arrizabalaga, who could revive his stuttering career at Stamford Bridge. But, every time he features for Chelsea, he makes an error directly contributing to a goal. Tuchel won’t stand for it.

Emil Audero has been in brilliant form for Sampdoria this term, having initially joined on loan from Juventus. While there’s currently nothing to suggest that he is being targeted by Chelsea, we wouldn’t be surprised to see Tuchel sign a new goalkeeper – and there’s few better in the world under 25.

RB: Reece James – Tuchel is not the kind of manager who is going to come in and start Cesar Azpilicueta in hope of tightening things up at the back. He likes to give younger players a chance just as much as Lampard did, so James’ spot in the starting eleven is safe for the long-term.

CB: Antonio Rudiger – As per Sky Germany, Tuchel has given Rudiger assurances over his future at Chelsea, having wanted to sign him for PSG previously. It seems certain that he’ll have a part to play under Tuchel, at Kurt Zouma’s expense, unfortunately for the Frenchman.

CB: Thiago Silva – CaughtOffside spoke to Ed, founder of PSGTalk.com, ahead of Tuchel’s arrival – with his relationship with Thiago Silva being a topic of conversation. He assured Chelsea fans that suggestions that there is a rift between the pair are wide of the mark, with them enjoying a good relationship at PSG, one that looks set to continue at Chelsea.

LB: Ben Chilwell – Chillwell’s performance level has dropped of late, but he was superb at the start of the campaign. Tuchel will soon learn of the qualities he has to offer down the left hand side, with Emerson Palmieri and Marcos Alonso providing little genuine competition.

DM: N’Golo Kante – We’re assuming that Tuchel will use the 4-1-4-1 system he has previously implemented with Chelsea, which there is no guarantee of, but if it was to be the case, Kante would be the most natural option to operate as the single DM, with Andreas Christensen being an alternative, more unorthodox option.

Tuchel did field Marquinhos in that position, unexpectedly, at PSG, so there is a possibility that a player like Christensen could find himself in a role of that kind, mopping up the space between defence and the midfield.

RM: Hakim Ziyech – Ziyech, while he has suffered with several injury problems this term, has been one of Chelsea’s more effective players going forward. His wand of a left-foot makes for some really dangerous in-swinging balls being played in from that right-channel. He’ll be keeping his place.

CM: Jude Bellingham – Eurosport report that Bellingham could be targeted by Tuchel as an alternative to Declan Rice, who was a target of Frank Lampard’s rather than the club. If Chelsea were to be successful in recruiting him, he could be a really useful and exciting option in the middle of the park.

Although, Mason Mount would understandably feel aggrieved to be dropped. Both players are capable of playing the 6/8 role that Tuchel likes to use in the midfield. It’s good to have options – with Mateo Kovacic and Jorginho also within the squad at current.

CM: Kai Havertz – Operating as a more advanced midfielder than his partner in the middle of the park, Chelsea fans will be desperately hoping that Tuchel is able to get the best out of Havertz. If they want to have any chance of this deal proving to be anything like value for money, they need him to.

LM: Christian Pulisic – Pulisic worked alongside Tuchel during their time together at Dortmund. The American was in scintillating form towards the tail end of last term. He’ll be hoping that a reunion with the manager he worked alongside as a teenager could see him rediscover that level.

ST: Timo Werner – Not to say that Tammy Abraham will have no role to play under Tuchel, but you have to believe Werner will come good eventually. The striker who was so prolific at RB Leipzig is still in there, he was just completely devoid of confidence under Lampard. It’d be a huge surprise to see him struggle under Tuchel.

Is that team good enough to win the league, if everyone is playing at their best?