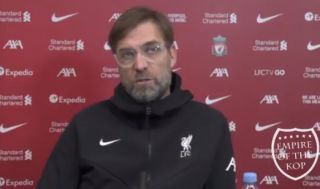 Lampard was dismissed by Chelsea earlier this week after a poor run of form for the west London giants, with Thomas Tuchel coming in to replace him.

As you can see in the video clip below, Klopp was clearly unimpressed with the decision, saying Abramovich is not known for being patient with his managers…

??"I think it's really harsh to make a decision that early, but obviously Mr. Abramovich is not the most patient person in the world."

Jurgen Klopp give his verdict on the sacking of ex-Chelsea boss, Frank Lampard ?? #LFC pic.twitter.com/shZ1cZZK8Z

The Russian has sacked a long list of big-name managers during his time at Chelsea, and Lampard surely won’t have been too surprised after his struggles this season.

CFC supporters will now just hope Tuchel can fare a bit better due to having a great deal more experience at some top clubs like Paris Saint-Germain and Borussia Dortmund.