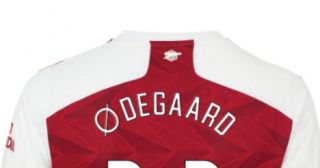 Martin Odegaard looks set to take the number 11 shirt at Arsenal ahead of his loan transfer being officially announced.

We’re yet to see anything official on this, but reports yesterday claimed the Norway international had passed his medical, with an announcement imminent.

MORE: Mikel Arteta provides update on Arsenal duo after they went off against Southampton

Martin Odegaard’s shirt is available to buy on the Arsenal website. Expecting an announce from #AFC soon. pic.twitter.com/XW9Em5NzZn

Odegaard looks an ideal replacement for Mesut Ozil at Arsenal, with Mikel Arteta’s side lacking enough in the way of creativity and quality in the final third this season.

Even though Odegaard hasn’t played often for parent club Real Madrid, he’s long looked a very promising young player and should show what he can do with more opportunities at the Emirates Stadium.