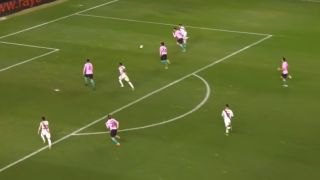 The Copa Del Rey looked like Barcelona’s best chance of silverware this season after the two Madrid clubs were knocked out by lower league opposition, but could they be following them with an early exit?

They currently have twenty minutes to find a leveller after Real Vallecano took a surprise lead this evening, and it’s a chance that Fran Garcia could never miss:

Francisco Garcia with the goal and they lead in the Copa del Rey.#CopaDelRey pic.twitter.com/z7qHgyzKq7

The goal owes everything to that touch on the right wing that destroys the Barcelona defender, so Barca don’t have long left to avoid a disaster here.