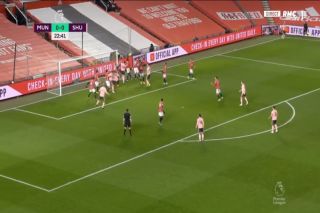 Manchester United have been stunned in the 22nd minute of tonight’s Premier League clash against nailed-on relegation candidates Sheffield United.

Chris Wilder’s side decided to crowd out the respectfully physically slight David de Gea as a corner was whipped in from the left side by John Fleck, that tactic paid off immensely.

After neither Alex Telles or Axel Tuanzebe could reach the ball, Kean Bryan was on hand to steer the ball into the back of the net from a couple of yards out.

This is undoubtedly a very special moment for Mancunian Bryan, who is a graduate of Manchester City’s academy and left them for the Blades in the summer of 2018.

There’s some controversy surrounding the opener as Billy Sharp appeared to at least nudge and at worst push De Gea as the ball was being delivered, preventing him from punching it away.

Were Ole Gunnar Solskjaer’s side hard done by here?