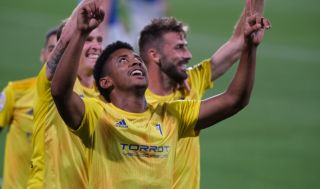 It’s always important for any club to have a replacement lined up when a first team regular leaves, and West Ham are the latest example of why it’s so vital.

They need to strengthen up front after selling Sebastian Haller to Ajax, but they keep coming up short in any negotiations as other teams sense the desperation and jack their prices up.

That will force them lower down the food chain in search of a player from a club who simply can’t turn down a decent offer, and Goal have indicated that Cadiz striker Anthony Lozano has become a target.

It seems that they’ve officially moved on from Sevilla star Youseff En-Nesyri because he didn’t want to move in January, while it should be simple to sign the Cadiz striker if they offer €10m for his signature.

Cadiz have just signed Ivan Saponjic so that makes them more flexible about letting someone go, but there’s not a lot about Lozano that would excite you as a West Ham fan.

He’s physical and has some pace so he could be a nuisance, but he’s only managed three goals in sixteen games this year and he’s never been overly prolific in Spain.

His signing would look a bit like a panic move for West Ham, but at least it is an option if they decide they simply need to add someone.