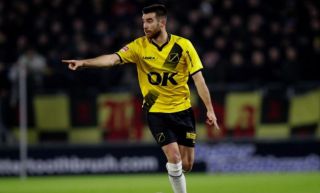 It was expected by many that Barcelona would re-sign a former centre back this month, but this is a bit of an odd one.

Sport have confirmed that a centre back will be having a medical today ahead of re-joining the club, but it will be Roger Riera rather than the expected Eric Garcia transfer.

Riera was a captain at youth level for Barcelona but he ended up leaving the club to sign for Nottingham Forrest in 2014. Since then he’s had spells with the B teams of Celta Vigo and Villarreal, while his main senior experience came with NAC Breda in Holland.

The report confirms that it’s always been his dream to return to Barca so clearly he jumped at the move, but it is expected that he’ll be registered with the B team until the end of the season.

He is 25 so he’s not at a point where he can be seen as a prospect anymore, but it’s also suggested that Barca tried to bring him back in the summer so it’s been in the works for a while.

Barca also have a serious defensive crisis in the first team so he could be another injury or two away from actually making an appearance, but it doesn’t sound like we should expect to see him with the senior squad unless there is a disaster.