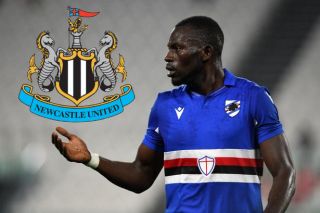 Newcastle United are reportedly set to make a major step forward in their bid to seal the transfer of Sampdoria defender Omar Colley.

The 28-year-old has looked a solid performer in his time in Serie A, and could now be set to earn a move to the Premier League before the end of the January transfer window.

Newcastle are firming up their interest in Colley, who could be an important addition for Steve Bruce’s struggling side, who have endured a terrible recent run of form.

The Magpies surely need to make changes in their squad if they are to survive relegation.

Colley alone might not be enough to help Bruce turn things around, but if he and a few other names can come in in the next few days, it could ensure a happier second half of the campaign.

Colley, a Gambia international, has previously also shown himself to be a reliable defender at Genk, as well as at international level.