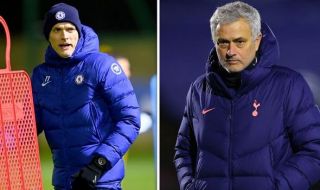 Tuchel has just replaced Frank Lampard at Chelsea, and Mourinho has made it clear that the German tactician will face a much tougher job in the Premier League than he did with Ligue 1 giants Paris Saint-Germain.

The French top flight is not as competitive as England’s top division, with perhaps as many as six teams looking to be in with a realistic shot at the title this term.

PSG, however, often have a pretty easy ride when it comes to winning the Ligue 1 title, with Tuchel winning the trophy twice in his time as manager at the Parc des Princes.

The 47-year-old has inherited a struggling Chelsea squad, with the Blues drawing 0-0 in his first game in charge to serve as a reminder of the scale of the job he has on his hands at Stamford Bridge.

Discussing Tuchel’s move to Chelsea, Mourinho said, as quoted by the Metro: “You cannot compare the job at Paris Saint-Germain with a job in the Premier League. It’s not possible to compare.”