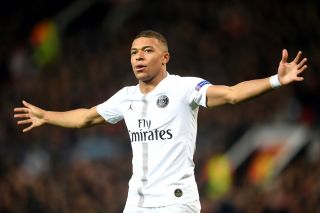 Jurgen Klopp has reportedly promised to make Kylian Mbappe’s Liverpool next big superstar should he agree to make a shock switch from PSG to the Premier League champions.

READ MORE: Major injury boost for Arsenal vs Man United as star now expected to be fit despite being ruled out

The French World Cup winner who has formed a prolific partnership with team-mate Neymar Jnr has racked up 106 goals in 147 games, in all competitions.

Since making his switch from Monaco, Mbappe has grown to become one of the world’s most highly-rated attackers.

With his contract set to expire in 18-months time and with no confirmed renewal, speculation that the 22-year-old could move on is beginning to mount.

There have been several recent reports linking the electrically paced French attacker with a move to Real Madrid.

However, according to French outlet Canal+ (as relayed by France Football), Mbappe is also high on Liverpool’s shopping list.

The report claims that manager Klopp is ‘seriously pressing’ Mbappe’s entourage with a view to make the 22-year-old his ‘undisputed superstar’ should he agree to join the Merseyside outfit.

Mbappe recently admitted that he currently weighing-up his options and is undecided whether or not to sign a new contract at PSG.

The French forward spoke to Telefoot Chaine (as quoted by France Football) and said: “We are talking with the club. I said that I am reflecting on it too, because I think it is a signature, that if I sign, I am investing myself for the long term into PSG. And I am very happy here.

“I have always been very happy here. The fans and the club have always helped me. And I will always be very thankful to the club. I want to think about what I want to do in the coming years, where I want to be, and that is now I will be reflecting on it. I think that yes, I will have to soon make a decision. But for now I am in deep thought.

“If I had the answer today, I would have given it today. This is not a desire to take up time, it is just to really think about it. I don’t want to sign a contract and then one year later say I want to leave because I did not want to sign the contract. If I sign, it is to stay. That is why it requires thought.”

It is not yet known exactly what Mbappe makes of Liverpool’s reported interest.

However, one thing is for sure, with his future still very much undecided and with Klopp taking such an interest in the forward, Mbappe’s decision could prove more difficult than originally thought.