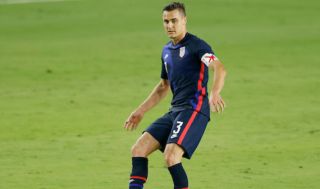 Quality players don’t tend to be available late in the winter window, so it means clubs either need to panic or think outside of the box when it comes to transfers.

Liverpool clearly need some cover at centre back after Jurgen Klopp’s update on Matip and Fabinho, but this would be an interesting one if they could get it over the line.

Football Insider have claimed that Liverpool are working on a loan deal with New York Red Bulls to sign Aaron Long until the end of the season, and there is a hope that it could be sorted by Monday.

The 28 year old defender has never played outside of the US but the MLS is shut down until April, so he’s available for a three month loan which wouldn’t have an option to buy included.

They confirm he’s captain of the national team so he’s clearly got leadership qualities, while the three month loan deal would also give time for van Dijk and Gomez to possibly recover from their injuries.

It would be an interesting one because he’s not well known in Europe so he would arrive as an unknown quantity, while it could even be awkward if he excels and Liverpool decide they want to keep him.