There have been plenty of Manchester United v Arsenal fixtures over the years to provide incredible entertainment.

The Roy Keane v Patrick Vieira spat at Highbury springs to mind, as does the 8-2 win for the Red Devils at Old Trafford.

There are many, many more talking points from across the years, but perhaps none is more famous than the ‘Battle of Old Trafford.’

MORE: The Arsenal man that Man United fans should be thanking for Marcus Rashford’s rise to the top

The fixture on October 20, 1990 saw twenty-one of the twenty-two players involved in a brawl which lasted for no more than 20 seconds but ended with the FA taking an unprecedented step of deducting league points from the two clubs.

Keith Hackett was the referee that day, and only booked Arsenal’s Anders Limpar and Nigel Winterburn at the time.

“I walked out onto the pitch at Old Trafford to officiate a game that became particularly challenging,” he told CaughtOffside.

“The game had been very enjoyable to officiate and I was wise enough to have the experience of thirty years of officiating behind me when out of nothing the game exploded into a mass brawl with twenty-one players involved.

“Sadly, I had failed to spot the instigators of the confrontation and was certainly not going to guess or issue any red cards on a gut feel.

“Twenty-one players confronted each other in the middle of the field with a lot of snarling and threatening with players holding onto each other to prevent an out-of-control escalation.

“It happened in a flash and within twenty-one seconds was back under my control with almost everyone on the pitch shouting calm down, calm down. Having not seen what had sparked the incident I could not sanction anyone with red cards.”

Arsenal’s Michael Thomas was one of those who, perhaps ill-advisedly, got involved in the brawl, despite being nowhere near the initial tackle which sparked the melee.

“There was always anticipation when we played Man Utd. A rivalry had been established and a few previous encounters were fresh in the memory,” he told CaughtOffside.

“Going into the match I was confident. We were second in the league and we were playing well, we were the better team at the time so I was definitely confident.

“We went ahead with just before half time with a good goal from Anders. Man Utd switched off and they were punished. It was no more than we deserved and we went in ahead.

“In the second half, we probably should have added at least one more. Then Nigel went in on Irwin and the match got its famous name. In fairness, the challenge was a hard one and in today’s game, he probably would have been sent off, especially with VAR. 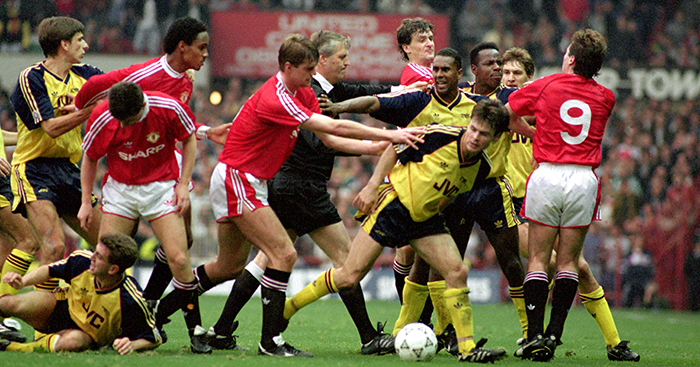 “McClair got involved, there were a few kicks. I ran over when I probably should have kept out of it and there were shoves here and there.

“I think I was pulled back by one of the backroom team. It all happened so fast and a few days afterwards we probably all felt a bit silly but it’s what can happen in the heat of things.”

Although it seems that both clubs and sets of players would’ve been more than happy for the incident to have died a death, the newspaper headline writers had a field day, and for a while afterwards, it remained hugely topical news.

Hackett’s role in the entire episode was also under scrutiny.

“I submitted a carefully written report to The Football Association and within a few days I was requested to attend a disciplinary meeting in London,” he continued.

“I was asked by the Chairman if I had any further comments about my written report. My answer was no and then I was asked to judge the incident again through video.

“That indicated that several payers should’ve received red cards, and I only yellow carded two players: Limpar and Winterburn.

“That evening on my way back from the disciplinary hearing I learned that the FA had made the decision to deduct points from both teams. This is the only time in league history that this action has been taken, and despite the deduction Arsenal still won the title.”

In the past few seasons, matches between the two giants of the English game have been tepid by comparison.

Whilst there’s no suggestion that players should go over the top in such games, there’s still room for the competitive edge of 31 years ago in the modern era.