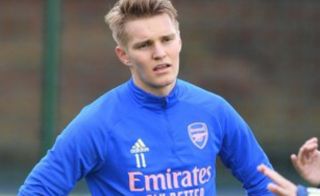 There’s a lot of intrigue and excitement about Martin Odegaard’s move to Arsenal, so hopefully he’s able to play straight away and settles into the team quickly.

He’s been pictured in training ahead of the Man United game this weekend, so there could even be some hope that he’ll make an appearance in that one.

It’s well known that Mikel Arteta is heavy on the tactical instructions and he likes to control as many aspects of the performance as possible, but this picture is funny as the look on Odegaard’s face either suggests total confusion or immediate regret at what he’s got himself into: