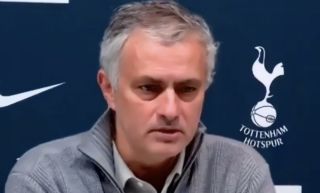 Tottenham Hotspur manager Jose Mourinho has hailed star-striker Harry Kane and has appeared to label the Englishman as ‘irreplaceable’.

READ MORE: Jurgen Klopp makes PSG superstar offer he may not be able to refuse

Kane, 27, was in action during his side’s Premier League clash against Liverpool on Thursday night.

However, after eventually going on to lose the game 3-1, Spurs’ woes were piled on after Kane appeared to injure both his ankles, which was later confirmed by the club.

Speaking ahead of his side’s next match against Brighton and Hove Albion on Sunday, Mourinho took the time to hail his leading striker.

“Harry Kane is Harry Kane,” Mourinho said. “There are players in some teams that are not replaceable.”