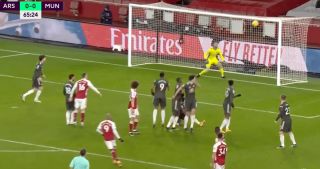 One of Arsenal’s best chances against Manchester United was this fine free-kick from Alexandre Lacazette.

Watch below as the Frenchman struck a superb effort that rattled the crossbar, coming ever so close to giving the Gunners the lead…

In the end, Arsenal couldn’t find a breakthrough against United, with both teams having to settle for a point after a 0-0 draw at the Emirates Stadium.

Lacazette did pretty much everything right here, in fairness, but luck just wasn’t on his side.