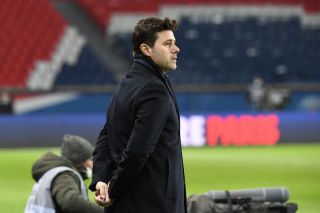 New Paris Saint-Germain manager Mauricio Pochettino has broken his silence on the recent and relentless links to Manchester United.

Prior to becoming Thomas Tuchel’s long-term successor in France’s capital, Pochettino, 48, was out out of work for over 12-months following his dismissal from Tottenham Hotspur.

Despite being one of world football’s most highly-rated tacticians, the South American mastermind opted to remain outside of football for the most part of last season.

Having reached the 2018-19 Champions League final with major underdogs Spurs, Pochettino was sacked just months later after a spell of disappointing domestic form prompted Jose Mourinho to take-over in his place.

During the Argentinian’s time-off, he was subject to mounting speculation that he could be in line to take the Old Trafford hot-seat.

Current United manager Ole Gunnar Solskjaer found himself under immense pressure during the opening stages of the 2020-21 campaign, which prompted world-wide speculation that Pochettino was waiting in the wings.

However, after finally managing to turn his side’s on-field fortunes around which has been reflected by their shock title challenge, Solskjaer’s future seems far less precarious now, than it did at the end of last year.

Speaking exclusively to AS’ newspaper, Paris-Saint Germain’s new gaffer has lifted the lid on what it was really like to be linked with a switch to United.

“I didn’t want anyone to think that I speak because I do not have a job and maybe, I’m offering myself,” Pochettino said, as quoted by Sports Witness.

“The good thing about that situation was that every morning you woke up in a different club. One day they placed you at [Real] Madrid, another at United… At PSG…

“That’s why I didn’t need to have that media visibility. I had it without wanting it. I was a bit lucky in that regard. They linked my name to different clubs and the exposure came spontaneously.

“I was traveling virtually from one club to another. Surely when you talk, it has some basis, but for it to be done for real, as with PSG, ties have to be closed.”