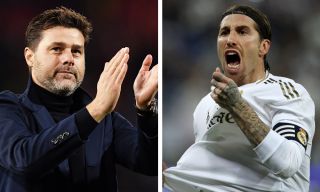 Ramos, 34, joined Real Madrid all the way back in 2005 after making a £24.3m switch from domestic rivals Sevilla, as per Transfermarkt.

After spending nearly 16-years with Los Blancos, fans had grown used to the prospect of their skipper eventually hanging his boots up at the Santiago Bernabeu.

However, in a shock turn of events, Real Madrid hearts could be broken after recent worrying reports claim the side’s captain is struggling to agree a new deal, as per Don Balon.

With his contract set to expire in the summer, financial worries are believed to be preventing the club’s hierarchy from reaching an agreement with Ramos.

There have been recent suggestions that the 34-year-old footballing great could be set for a shock switch with PSG rumoured to be frontrunners.

Speaking to Marca, when asked about whether or not he’d welcome Ramos to the French captial, Pochettino said: “After one month [at PSG] I am finding players with great leadership.

“The great [players] are able to play and coexist in different projects and cultures, but I am very respectful.

“PSG’s strategy has been the same for years, ever since we signed Ronaldinho: to look at market opportunities and bring in those who can improve what we have.

“We will see in the coming months. Here, Ramos would find a great club with the obsession to always win.

“PSG are one of the biggest [clubs] in the world.”