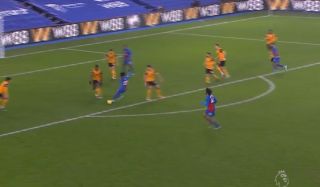 There are few things more joyous in football than the ball smashing into the back of the net, and this is the perfect example from Crystal Palace’s Eberechi Eze.

His shot does look fairly close to the keeper so perhaps he should be doing better, but it’s just been hit so cleanly and with enough power to fly past him and the way it hits the net is pretty mesmerising:

A cracking goal by Crystal Palace! Eberechi Eze finishes off a great team move with a powerful strike ?

Most of the attention at Palace goes to Wilfried Zaha and rightfully so, but Eze is slowly starting to emerge as a genuine gamechanger himself this season.