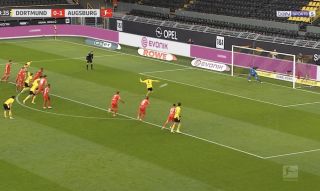 Whilst in action during Saturday afternoon’s latest round of domestic fixtures, the Black and Yellows played host to bottom half side Augsburg.

Having fallen behind to a shock Andre Hahn opener after just 10-minutes, Dortmund were hoping to draw level before the half-time break.

Edin Terzic’s men were presented with the perfect oppotuntity to do just that when a penalty was awarded just 10-minutes later.

However, the usually reliable Haaland, who stepped up to take the spot-kick unleashed his trademark power shot only to see his effort smash against the crossbar.

This season’s Golden Boy will be breathing a sign of relief after team-mate Thomas Delaney recently made up for his error and levelled proceedings at 1-1.