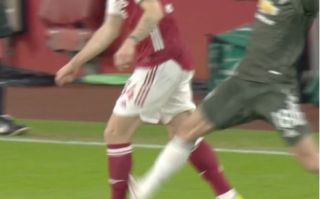 It does feel like VAR has been getting marginally better as the season has gone on, but there are still so many examples where they seem either powerless to act or the officials are straight up bottling decisions.

The latest example came tonight as Bruno Fernandes clearly rakes his studs down the back of Granit Xhaka’s ankle, but the VAR check resulted in no further action:

Bruno Fernandes deliberately raking Xhaka’s Achilles and despite a VAR check, absolutely nothing is done about it. Shameful! #ARSMUN pic.twitter.com/QsynxUgwKD

There’s no intent to play the ball so it has to be at least a yellow, so it’s another example of VAR not coming up with the right outcome despite having the technology to help them out.