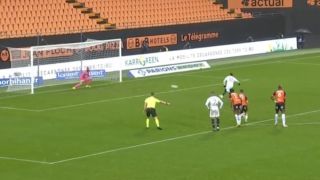 Paris-Saint Germain superstar Neymar Jnr has gifted his side the lead against Lorient in Sunday’s Ligue 1 match-up after successfully converting his second spot-kick of the game.

READ MORE: Real Madrid and Barcelona following Manchester United starlet in line for regular first-team football until the end of the season

Paris-Saint Germain’s Brazilian ace, who signed from Barcelona for a whopping £199.8m back in 2017, as per Transfermarkt, has just scored his 83rd goal in all competitions for the Ligue 1 giants.

After falling behind in Sunday’s match after just 36-minutes, Neymar has been forced to come up with the goods when they mattered most.

After dragging his side level from the spot just before the game’s break, the talented South American has done it again just the other side of half-time.