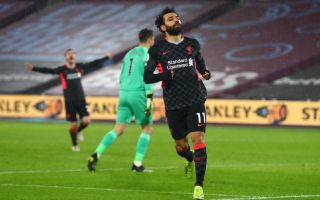 Liverpool star Mohamed Salah has now scored 20 or more goals for the club in four consecutive seasons after his brace at West Ham last night.

The Egypt international was in superb form for the Reds as they earned a 3-1 win away to the Hammers, with Georginio Wijnaldum also among the scorers.

Salah, however, provided the real quality up front for Liverpool in the absence of both Roberto Firmino and Sadio Mane, and in doing so he did something no Liverpool player has managed since Ian Rush 34 years ago.

21 – Mo Salah is the first player to score 20+ goals in all competitions in four consecutive seasons for Liverpool since Ian Rush did so six times running from 1981-82 to 1986-87. King. pic.twitter.com/JfqMJSluVc

The 28-year-old has truly been outstanding since joining LFC from Roma, scoring 115 goals in 182 games in all competitions for the Merseyside giants.

He’s now up to 21 goals for this season, just two shy of his total tally last term.

Could we see Salah get back to the kind of ridiculous form that saw him hit that incredible tally of 44 in all competitions in his first season at Anfield?