Manchester United and Liverpool are reportedly among the transfer suitors for Aston Villa wonderkid Carney Chukwuemeka.

The 17-year-old is considered one of the most promising young talents in English football at the moment, and it seems he’s already attracting plenty of interest from bigger clubs.

Some of Europe’s giants are mentioned as keeping an eye on him, as are Man Utd, Liverpool and Man City, according to a report in the Times.

Chukwuemeka has been talked up by Villa chief executive Christian Purslow, who described him as probably the best 16-year-old in the country last year.

United have a proud history of bringing through young players, either from their academy or through smart moves in the transfer market, most notably for the likes of Wayne Rooney and Cristiano Ronaldo in their recent history.

Liverpool have also shown a willingness to use young players under Jurgen Klopp, with Trent Alexander-Arnold a particular example.

Chukwuemeka would do well to choose either of those clubs to continue his development, but he might also be tempted to follow in the footsteps of Jack Grealish and rise from Villa’s youth team into the senior side. 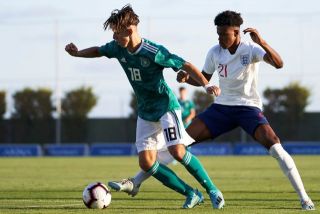