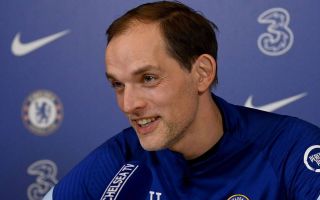 beIN Sports correspondent Ibrahim Khadra has confirmed that Chelsea winger Hakim Ziyech is 100% fit ahead of their clash with Tottenham on Thursday.

Ziyech’s season started slowly, having sustained a knee injury during a pre-season friendly against Brighton. While he enjoyed a purple patch after returning, his form has tailed off.

The Moroccan was not included in Chelsea’s match day squad against Burnley at the weekend, which naturally brought with it questions as to whether or not Thomas Tuchel was a fan.

It could well be that Ziyech was actually just burnt out, though, with a game off the right course of action to ensure that another injury was not sustained.

Either way, you get the feeling we will have an answer come Thursday night when Tuchel names his squad to face Spurs, with Ziyech seemingly being ready to go.

beIN Sports correspondent Ibrahim Khadra claimed via Twitter that Ziyech has informed them he is 100% fit and available to feature in the London derby.

If Tuchel chooses to snub the former Ajax man once again, with Ziyech himself having declared himself fit, you get the feeling there could be more to this story.