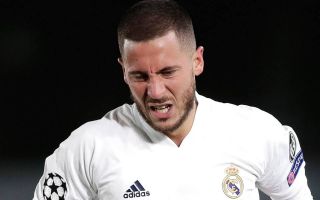 Eden Hazard has missed Real Madrid training after seemingly sustaining yet another injury issue, according to Marca.

Hazard was hailed as a hero at Chelsea, but departed in order to pursue a childhood dream of playing for Real Madrid and working with idol Zinedine Zidane.

What was supposed to be a dream has developed into a nightmare.

The Belgian had little influence in his debut campaign with Los Blancos, despite them winning La Liga, and as Marca report, he has missed 17 of Real Madrid’s 30 games this season to date through either injury or illness.

For a player of his calibre, who arrived with his price-tag, that is quite frankly not good enough.

Unfortunately for Hazard and Real Madrid, he could be set to miss even more. As per Marca, he was forced to skip training on Tuesday after suffering with what is at current unspecified discomfort.

For his sake, let’s hope it’s nothing too serious. When in full flow, he’s a joy to watch. He deserves to have an opportunity to get back to that level in Madrid.