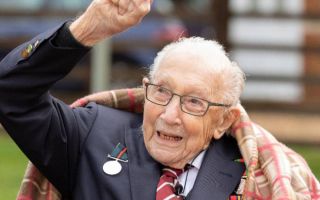 Captain Sir Tom Moore, who raised millions of pounds for charity during the COVID-19 pandemic, has today passed away.

As reported by the Guardian, Captain Sir Tom Moore, a World War II veteran aged 100-years-old, raised £38.9M for charity during the first coronavirus peak in the UK by doing laps of his garden.

He was subsequently knighted after being hailed as a hero across the country. He provided inspiration to a nation which was on it’s knees.

The FA later announced that Captain Sir Tom had been named captain of the ‘Lionhearts’ scheme, which they explained “aims to pay homage to 23 inspirational individuals who have gone above and beyond during this challenging time for the nation.”

The award was presented to the Captain by David Beckham.

Unfortunately, as mentioned in the aforementioned report by the Guardian, Captain Sir Tom fell ill and was admitted to hospital, where he tested positive for COVID-19. He has now sadly died.

The entire nation has fallen in love with the Captain over the past year, with his determination being an example for all to follow.

Here’s how some within the football community in the country have paid tribute to him. Rest in peace, Captain Sir Tom Moore.

We’re deeply saddened to learn of the passing of @captaintommoore.

We were honoured to welcome Captain Sir Tom as the leader of our #Lionhearts last year and know that what he achieved will continue to inspire so many.

All of our thoughts are with his family and friends. pic.twitter.com/0MHiXvj4Ip

How terribly sad: Captain Sir Tom Moore has passed away. What an extraordinary life, with the most wonderful finale over the last year. A National treasure and a hero. RIP.

You were a true inspiration to us all. Thank you, Captain Sir Tom Moore ? https://t.co/JaHHWUzXU9

An inspiration to us all ?

The thoughts of everyone connected with Watford FC are with his friends and family.

? Rest in Peace, Captain Sir Tom. A true inspiration to us all.#Rovers ??? https://t.co/yeJfTP2O9H

Forever a hero and an inspiration to us all ? pic.twitter.com/YCWOc2VKP5