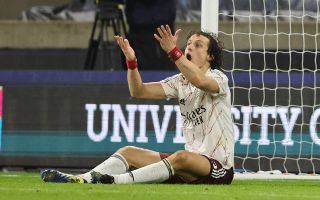 As if you needed any more evidence that David Luiz was a liability for Arsenal, OptaJoe have tweeted further proof.

Luiz, who has continually fallen short for Arsenal since signing from Chelsea, put in a man of the match display against Manchester United at the weekend.

Just when you thought that he was growing into an accomplished, old-head centre-back under Mikel Arteta, he received a straight red card against Wolves this evening.

Regardless of whether or not it was intentional, it was silly, and the referee’s decision was upheld by VAR – without there being much argument to the contrary.

It’s not the first time Luiz has acted in this manner, either. His nonchalant defending has costed Arsenal time after time, as this stat tweeted by OptaJoe shows.

3 & 6 – Since making his @PremierLeague debut for Arsenal in August 2019, David Luiz has received more red cards (3) and conceded more penalties (6) than any other player in the competition. Calamity pic.twitter.com/TLmGdvKP4w

There is no doubting what a talented footballer David Luiz is, but it’s quite incredible to think that managers are still entrusting him to defend their goals.

He has fallen short and cost games time after time in his career. This red card is just another example of how untrustworthy he is.